Effer’s new stabilisation system increases both working area and stability in front of the cabin.

We are proud to tell you about our new stabilization system which puts together the features of a traditional subframe with the CroSStab, the well-known Effer solution. With this combination we have created V-Stab, the base with V frontal stabilisers, which guarantee optimal 360° stability without specific operations on the truck frame.

The new V-Stab offers important benefits to the operator:

1. A 35% wider working area. V-Stab allows a 243° operating range. As you can see in the video, the working area increases by 35% compared to a traditional stabilization system. Also with crane at maximum load capacity.
2. Heavier loads, also in front of the cabin. The special geometry of V-Stab, engineered by Effer technicians, guarantees increased stability in front of the truck. More frontal stability means a significant increase in load capacity in that area compared to traditional stabiliser systems. In particular , the operator will enjoy a four-fold increase in his lifting weight capacity at the front of the truck. All this adds up to even more versatility!

3. Maximum performance also with maximum boom reach. Thanks to V-stabilisers, the arm of the crane can move loads much further compared to models with standard bases, thus guaranteeing a more effective operation during displacements. The working area has increased: with maximum loading capacity at maximum reach, V-Stab impressively increases working area by 15 metres.

V-Stab solution is available for the models from 60 txm and it has already been successfully installed on the models 685 and 855 for many clients.

The development goes on! 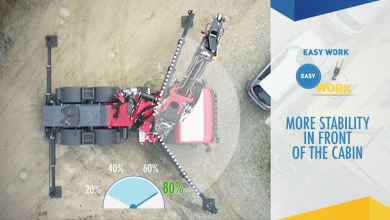 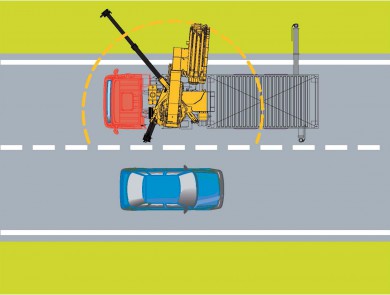 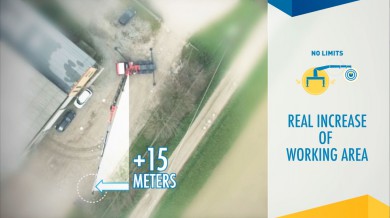